The aim of this campaign is to prevent antisocial behaviour

This civic campaign, sponsored by AUDIOTEC and GIBACARS, was revealed at a press conference 14 March at “Caffe di Mare” in Salou...

...and included the following personalities: [left to right] 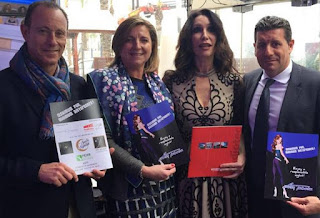 This awareness campaign was presented to the public in a comic format for the first time. It will be an international campaign which they will export to other countries – and ultimately - worldwide. They timed it prior to the “SalouFest” as a tester for an international campaign because Salou has been severely criticized in recent years and accused of being problematic [some say not true]. Bearing this in mind, the International Nightlife Association, the European Nightlife Association, FECASARM, Spain Nightlife, FEHR and the Salou Tourist Area Business Association decided together to do as much as possible to prevent unsociable behaviour during the celebration of this year’s event.

Their objective is to regain the event’s previous good reputation and is why they decided to launch this international campaign for the first time in Salou as a tester in the lead-up to the new tourist season and "SalouFest".

They aim to make the young tourists and students aware of dangers and negative consequences should they behave in a certain way while out celebrating. The comic presents these suggestions in a light-hearted and easily understandable way.